"When you think of the music of New Orleans, chances are you're not imagining anything like Whadeva—semi-avant-garde improvisation with light electronics is hardly the first association that comes to anyone's mind. Nonetheless the Big Easy's personality is still clear through this freewheeling EP, which was knocked out in a Ninth Ward studio in one free-spirited day. The trio of players are all based in the city, if not lifelong natives, and they like to channel its spirit of celebration and spontaneity alongside any other parts of their respective backgrounds. This session got a little extra dash of seize-the-day spirit from being made at the onset of the Covid-19 pandemic, just when everyone was aware something was going on but not yet realizing how big it would be."

JazzWorldQuest - Jazz News With A Global Perspective: USA: Maude Caillat, Damani Butler, Billie Davis(US...: "Whadeva" It had not reached New Orleans yet, or so they thought. They had been prepping these recordings since late December, ear... 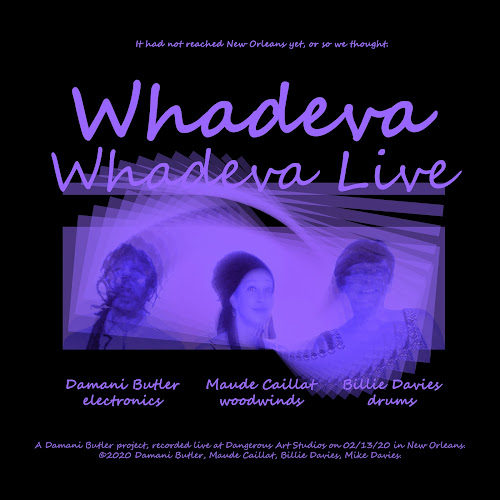 "Whadeva"
It had not reached New Orleans yet, or so they thought.

They had been prepping these recordings since late December, early January. Damani Butler contacted Billie Davies and Maude Caillat asking them whether they would be interested in doing a project with him. He also mentioned he had contacted female artists for this project. Both Billie Davies, an american drummer from California, and Maude Caillat, a sax player from Switzerland, were currently working and residing in New Orleans. Damani had rented a house in the Lower Ninth Ward, which became Dangerous Art Studios, and was busy transforming it into the whole house and whatever sounds in it, showed in it and whomever entered it, being part of a work of art he was creating.

The project would be experimental, completely improvisational audio art. Intuitive, instinctive in nature Damani would be doing his electronic loops, beats and waves while Caillat and Davies played whatever they played. Billie decided to use her electronic drumset and Maude would bring her sax and flute to the project. Mike Davies would be recording the project, and be responsible for mixing and mastering the music that was recorded live on 02/13/2020 for a later unedited release of what was played that evening.

This was definitely so very much a Billie Davies project, always wanting to create, no preconceived ideas for the music, no notes written, no words written, no concept conceived but what you’re surrounded by, play what you feel at this moment, express your feelings as the now keeps moving forward in the now, whatever happens, a direct connection from the brain to the sound, whatever comes up, whatever makes you move in whatever direction.

Damani Butler was in his room, surrounded by a hundred pieces of all kinds of audio equipment, from keyboards to synthesizers, to percussion, to whatever. Maude Caillat was in her room, with her woodwinds and a microphone to record it surrounded by several pieces of Damani’s electronic art. Billie Davies was in her room, her electronic drums that can produce what she calls whatever a drum or percussion sound with sometimes even an organ or bass or guitar sound, and a light show for the mood. All the rooms throughout the house had serious wattage stereo speakers so everyone would hear what everyone else played and wherever the people that attended the recording were they could hear all of it come through speakers. Several people showed up, gathering in the kitchen where there was wine, beer, whiskey and coffee and whatever they brought. 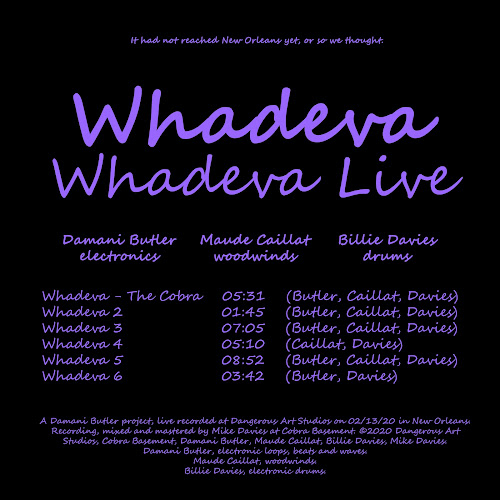 All the music for "Whadeva" was recorded during the Coronavirus outbreak with a final recording date of February 13. It had not reached New Orleans yet, or so we thought, with mardi-gras slowly but surely going into full swing. All we knew was what we heard and read and saw, which then made me think... and we all got sick with some type of flu. A month later we were all on lockdown and now it is time to let go, to let this music go.

The project will be having different iterations, the first iteration, this current release of 6 parts being the album “ Whadeva ” and 1 single release called “ The Ninja ” has been produced by Mike Davies and Billie Davies.

Damani is an experimental, multi/mixed media artist, lyricist and music producer from Oakland, California now living in New Orleans, Louisiana, specializing in interactive audio, visual and physical object art with a focus on up-cycled electronics and unique furniture. He has spent the last 25 + years informally training and educating himself in all areas of creative and technical interest, developing and evolving his skill-set by way of volunteering for skilled professionals in exchange for knowledge and guidance, watching instructional videos, attending workshops and training programs, reading and studying books, manuals, instructions and other literature on all subjects relative, watching and asking questions as well as good, old fashioned DIY practice, trial and error. He has independently completed a library of works in the fields of art, experimental music and lyricism often combining the three as he feels.

His accomplishments include audio productions in the genres of underground hip hop, experimental electronic music, audio art, sound experimentation projects and even coining and naming his own genre, "Crack Rock". Short and medium length video productions in the categories of music video, installation and project documentation/presentation, video art and he’s presently working on a documentary called "Adventures in Art and Music"

Maude Caillat grew up in Switzerland where her dad taught her to read music and play wood flute transmitting his passion for music to her when she was 5 years old. At 18, the call for different sonorities and rhythms became so strong that she decided to take a backpack and her saxophone in the direction of Senegal. After 6 years living in Dakar she developed a special sensibility and true love for traditional Senegalese and Mandingo music playing with pretty much everybody in town. In 2010 Maude was part of the band who won the RFI award for the best emerging African band. After a 3 month tour around Africa, Maude, her backpack and her saxophone ended up in Paris. While playing and recording there with several African musicians based in France, it's with Tarace Boulba, a gigantic funk and Gogo brass band touring all around Europe and the USA, that Maude discovered the music and the culture from New Orleans. After 6 years in France, once again the call of the “riddim” became too strong and she decided to take a plane to Louisiana. In New Orleans, Maude formed 2 bands, The Afrodiziac's Jazz (Ethiopian Jazz ) and SingleMaltPlease (hip hop jazz). She had the chance to collaborate with a lot of extremely talented local musicians and even played 2 times at the Jazz Fest with Seguenon Kone, a master percussionist and choreographer from the Ivory Coast. Through the years she discovered a huge interest in playing free jazz, experimental and improvisational music, an interest which grew more and more and brought her to meet Billie Davies who's the perfect "partner in crime" with her magic influences and rhythms to make it sound whatever... Whadeva ...

Billie Davies is an American, self-taught, natural, drummer and composer best known for her free, instinctively avant-garde compositions since the mid nineties, and her improvisational drumming techniques she has performed in Europe and in the US. All of her music is improvisational ... a conversation between musicians and musical instruments, a joint emotional expression inspired by a certain feeling, thought or perspective that is being communicated to an audience, a listener, a community.

Billie Davies was born in Brugge, Belgium. She played and performed all over Europe until immigrating to the United States at 32 and becoming a US citizen while living in California. While living and playing in the South of France, in Perpignan, Montpellier, Toulouse and Biarritz, in the early 1980's, Billie received a talent grant from Max Roach to study at Berklee College of Music. While living in Hollywood on the infamous Hollywood Boulevard in 2013, Billie Davies received the "Jazz Artist of the Year" Award by the 23rd Annual Los Angeles Music Awards. In March of 2014, after 25 years in California where she released 2 albums, in 2012 “ all about Love. ” and in 2013 “ 12 VOLT ”, she moved to New Orleans where she has graced stages ever since and in 2015 she released “ Hand In Hand In The Hand Of The Moon ”, after a while she formed a solid foundation line-up with Evan Oberla and Oliver Watkinson and released 2 albums with them, in 2016 “ On Hollywood Boulevard ” and in 2018 “ Perspectives II ”. She received more attention due to a player feature in Downbeat Magazine May 2016 edition, "BILLIE DAVIES '20 Years Stronger'". " On Hollywood Boulevard ", the album she released on 12/10/2016, became a January 2017 Editor's Pick on DownBeat.com. December 2017 Billie Davies was nominated for "Best Contemporary Jazz Artist" in New Orleans by 2017 Best Of The Beat Awards. December 2019 Billie Davies was nominated "Best Drummer" in New Orleans by 2019 Best Of The Beat Awards. 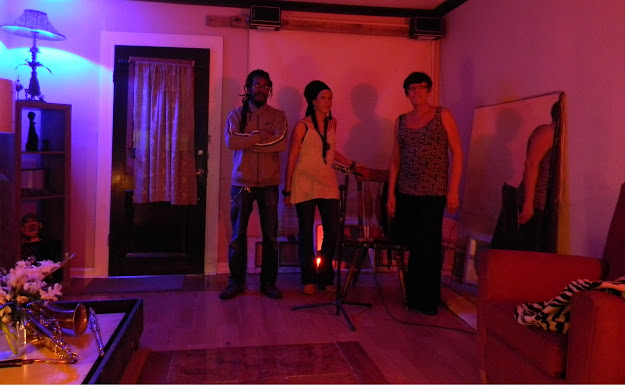 
Damani Butler - electronics/loops/waves/beats
Maude Caillat - woodwinds
Billie Davies - electronic drums
Mike Davies - audio
All the music you will hear under "Whadeva" was recorded during the Coronavirus outbreak with a final recording date of February 13. It had not reached New Orleans yet, or so we thought, with mardi-gras slowly but surely going into full swing.
All we knew was what we heard and read and saw, which then made me think... and we all got sick with some type of flu.
Aye - Ai - Oy vey - Oei !!!*☆Corona☆*!!!
A month later we were all on lockdown and now it is time to let go, to let this music go.